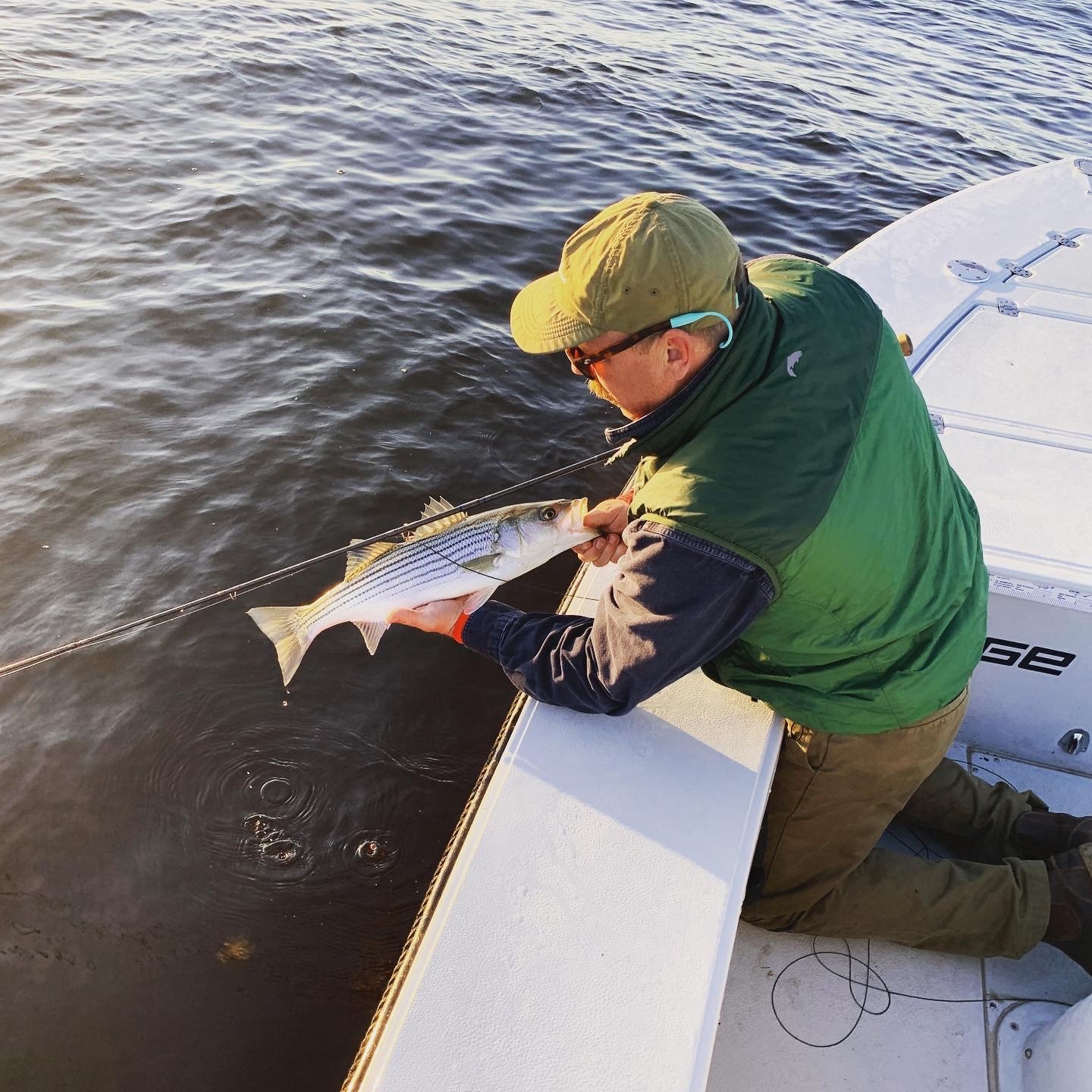 I just lost a booking because my charter boat is 100% catch and release for striped bass.

The angler was a referral from a good friend, and he was a local guy. He was very nice on the phone. The kind of guy that, as a guide, I’d thoroughly enjoy spending a summer morning putting on fish. He most likely would have turned into a repeat customer, would have fished with me every year, maybe multiple times. He would have referred his friends. After the charter we would most likely have grabbed lunch somewhere, laughed a lot, talked about our kids, fishing trips we’d taken, what we did when we weren’t fishing. He probably would have hired me to take him albie fishing on the Cape. That’s the way local clients work. If you do a good job and treat them well, they can help you build an incredible business. And because our season is short and I’m a Realtor as well as a charter captain and Maine Guide, there’s a chance he would have become a real estate client – or at least a real estate referral source – as well.

But after he booked the trip he visited my website and saw that all striped bass trips were catch and release only, and he emailed me and cancelled his trip. He wanted his crew to be able to keep a fish or two he said.

I could very easily have responded and said, “You know what, for you, because you’re local and because you were referred by John, I’ll let you keep whatever legal fish you catch.” I mean, let’s face it, if he brings three friends and they all keep one fish, is four fish really going to determine the future of the striped bass? I could have those fish in the fish hold on the boat, cleaned and bagged at the dock, and headed home with my angler – and probably with a handsome tip as a thank-you – and not one of my fellow conservationist guide friends would know the better.

The answer to that question, regarding those four fish, to my mind at least, is a resounding “yes.”

Those four fish do represent the future of the striped bass fishery.

Perhaps those four fish wouldn’t drop the eggs that led to the restoration of a fishery that is headed, quickly, in the wrong direction. It’s quite likely those fish won’t even make it out of Maine, or even out of Casco Bay before being snapped up by some other angler looking for a chance to bring dinner home. And if those four fish do make it out of Maine on their migration home for the winter, will they make it back through New Hampshire and Massachusetts, Rhode Island, Connecticut and then through the real gauntlet, the Long Island Sound and past Montauk, past New Jersey? In each of these states they’ll have to pass literal legions of end-of-season anglers hitting the legendary fall migration – on party boats and head boats and private boats galore, not to mention thousands fishing from shore and from bridges and canals – in search of that trophy fish, so they can take numerous pictures to post on social media, to then maybe release healthy enough to swim off, but more likely to remove from the water forever, to take home with the purpose of eating but equally as likely to not eat, but throw out due to freezer burn or simple lack of interest.

So how do those four fish that I don’t allow to be kept on my boat save a fishery? By making just one angler consider – if only for a moment – where we sit as anglers in a fishery in trouble.

If just one of the folks that might have come on my boat but doesn’t because I’m 100% catch and release for striped bass, if just that one thinks, “Why would this guy give up a day’s pay for a couple of striped bass,” if that person visits my website, listens to my podcast, maybe even calls or emails me and begins to understand the gravity of what we face, maybe he or she starts to change his or her perspective.

And the next time he’s fishing he decides to replace his tail-position treble hook with an inline hook on his lure.

Or maybe she makes a commitment to releasing every striper she catches without taking the fish out of the water.

Or together they work to revive every fish they release properly after taking very, very fast photos that reduce the time-out-of-water for the fish. And then they do some more reading, and they join Stripers Forever, or ASGA, or Menhaden Defenders, or Keep ‘Em Wet, and they decide to not keep another striper again until the fishery is recovered.

And their friends, who at first rolled their eyes at their newfound religion, start to “get it.” And although they make fun of them for “trying to save the earth” in the beginning, suddenly find themselves not dropping schoolies into the sand and kicking them back into the surf, but instead landing them and releasing them entirely under water, without even realizing they’re doing it.

And best of all, the children of all of these folks start to see how their parents interact with the fish, and they act differently, and they stop keeping fish that will never get eaten, but which eventually just get tossed, freezer-burned, into the trash. And instead, they look forward to maybe seeing that fish next year, a little bigger, a little smarter, a little more muscular, and lot more fun to catch, and responsibly released. And they start to see the value in the cycle. And they understand that someday, when the fishery is healthy and the fish are truly abundant, that they can keep a fish to eat without worrying about it. But until then, we learn how to treat these fish like spun gold.

But I’ve seen the pictures from the ‘60s of pickup trucks absolutely filled with hundreds of 50” striped bass that were headed…where exactly? To the dump most likely. Caught and thrown in a pile for the sake of the glorious, triumphant photograph. You can almost hear the fishermen who caught them.

“We spent all night doing that. And we beat out the ten trucks parked near us by at least ten fish.”

And at the time, no one cared. The stripers were limitless. There was no end to them. You couldn’t possibly fish them out.

But all that has changed. That would NEVER be accepted today.

And why is that? A lot of reasons probably. Better science, better data, better ability to share information quickly. The crash of the fishery in the ‘80s probably changed a lot of hearts and minds.

Whatever the reason, there are far more people caring far more deeply for this fishery than every before.

But I like to think it may well have started with one person deciding to save four fish.