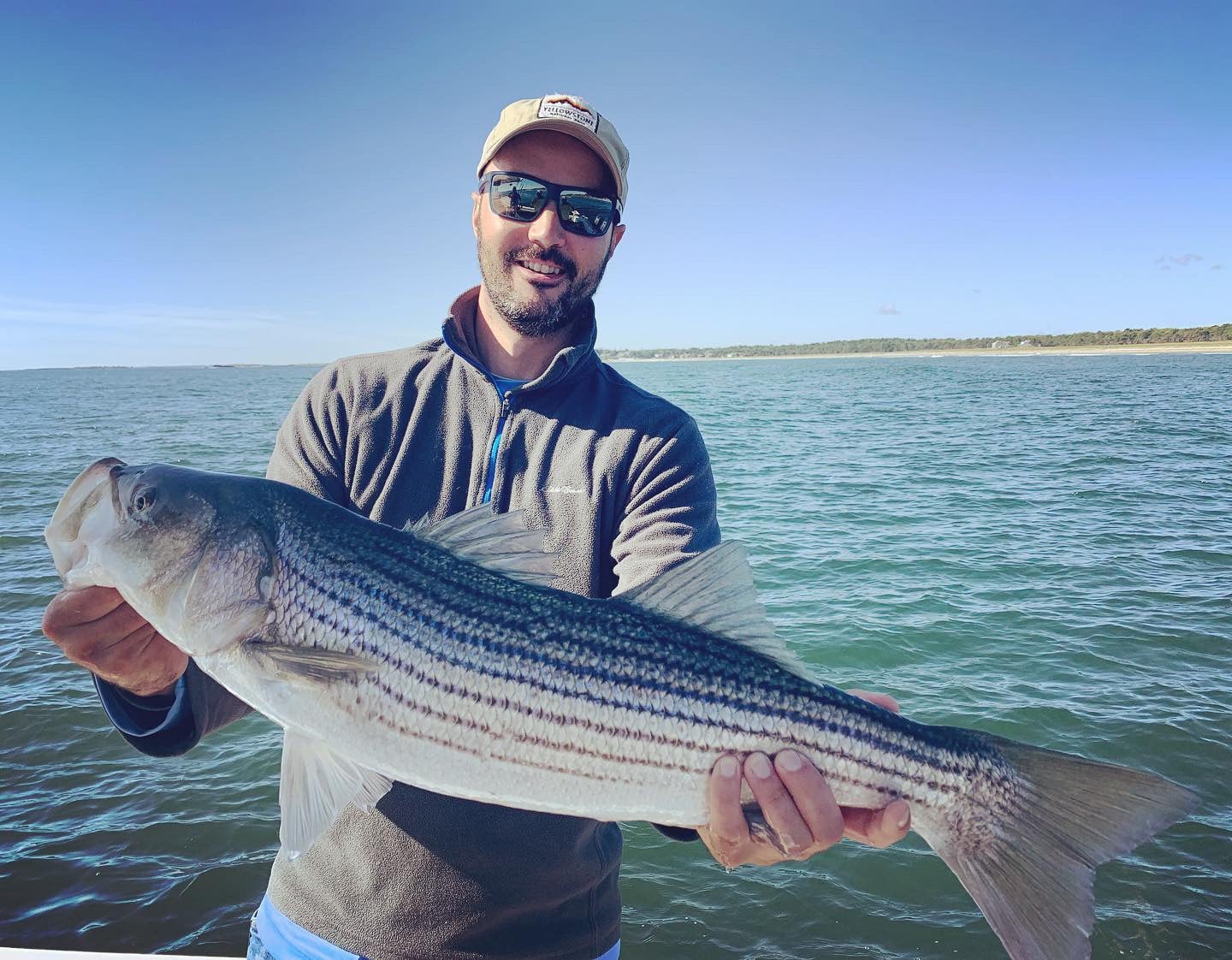 It must be spring in Maine. My fish phone is beginning to ring, I check every bay I drive by for signs of busting bait, and I start to hone my excuse-o-meter that will allow me to get out of weddings/BBQs/Bar Mitzvahs/funerals/etc. so that I can sneak away and fish. It is amazing how detailed and convincing a lie I can construct if it means that the reward is being out on the boat trying to figure out the newest moves from our striped-and-finned friends.

I approach this year’s striper season with hopeful apprehension; last year was a much better year, with some of my old haunts right near Portland Harbor producing somewhat reliable fish. That is not to say the old days are back, by any stretch of the imagination. In the old days, back before I was a guide, my buddy Lipper and I would launch my beat up old boat after work and catch 20-30 fish between us on fly rods. Mind you, these weren’t 45-inch hogs, but they were feisty, healthy schoolies that would never fail to make us hoot and holler like two guys who had just hit the lottery with a shared ticket. As I remember, we almost never got skunked and although we had a reliable little hole that we disclosed to no one, fish could be found fairly reliably almost anywhere that seemed like it should produce a hookup or two.

I miss those days. Sometimes I would wake up at 4 am and throw on shorts and flip-flops and go cast for an hour off a small local beach. Every morning would produce two or three fun battles, and would serve as my therapy for the day. But today is different. For reliable fishing, I’m forced to ferry my clients for nearly 40 minutes to an area that continues to hold fish. A great day of fishing produces four or five bass. Mind you, they are typically far fatter, far older fish than we used to catch, and that’s great for my charter clients, but it does beg the question: Where the hell are the schoolies? And if I am having trouble finding the small fish, what will that mean for the fishery in two or three or six years when those small fish should have become big fish?

The Chesapeake has been emptied of pogies (menhaden), sacrificed for fish oils for the supposed health benefits, and the by-product of that process is shipped to Asia to feed stuff that will be shipped back to us for consumption. Pogies are the basis of the food chain for every predatory thing that swims on the East Coast, and for many things that fly. It’s no secret that many of our coastal bird populations that rely on pogies for sustenance are suffering. But pogies are filled-to-bursting with marketable oils sold to people who could just as easily get it by eating a balanced diet, but who have fallen hook, line and sinker for the marketing hype of the do-this-or-die crowd, so no one talks too much about restoring their stocks. In the old days, massive schools of voracious bluefish would corner a school of pogies in a cove and go to work just madly biting at the delicious mass of oily goodness. And below this scene of mayhem? Big, beautiful opportunistic striped bass, picking away at the leftovers of the massacre as they fell to the ocean floor. And if you could get a lure or a chunk of bait down through the boiling madness of the bluefish blitz, you had the chance to boat some absolutely massive bass. I remember fishing with my buddy Bob on Cape Cod, who would string together cuss word combinations that would redden the face of a seasoned sailor at not being able to get down through the bluefish to get to the stripers during these feeding frenzies. Eventually though, he’d hook into a massive striper and then his swearing would turn to celebration and his screaming to laughter. Never before or since have I fished with a more enthusiastic angler. What I wouldn’t give to have the heartbreaking problem of releasing one 28″ bluefish after another as we attempted to lure in one of the trophy bass lurking in those depths. What I wouldn’t give to spend another day fishing with Bob, God rest his soul.

So with the complete disappearance of the basis of the bass food chain, management officials have taken to attempting to control every other aspect of the poor fish’s existence, with mixed, mostly not-particularly-positive results. This is not a slight to the folks doing the real work on the ground floor – the biologists, marine scientists and policy makers who are doing their damnedest to protect what fishery we have left. Sadly, those people know the real problem, and they know that the answer is to bring the pogey back, plain and simple. But they also know that politics are involved, and that a few commercial operations will write checks big enough to make a difference. This for less than a few hundred jobs, which is what the politicians always say they are protecting.

The first time I every fly-fished for stripers, at my father’s insistence, I caught a 40-inch striper at Popham Beach, at the mouth of the Kennebec River on a fly my father had developed, called “The Holy Mackerel.” From that day on, I was obsessed, and as I stood in the surf that day, gently reviving that monster fish and then watching it push off into the depths, I promised myself that I would work overtime to protect the incredible resource that is the striped bass.

I look forward to what I hope will be a good season. And I hope that if you fish for stripers, you too will educate yourself on what we can do to bring back this invaluable animal, and protect it once and for all for the public good. The greatest hours of my life are spent on the water with family, clients, and friends chasing stripers and recounting stories of fish caught, fish lost, and all of the amazing stuff that happens even when they aren’t interested in anything we can throw at them. I hope that at some point, all of us who enjoy this sport fish can agree that losing them would be an incredibly sad occurrence.

Who Cares About One Stupid Fish?